"Mathematical Notes of NEFU" were established with the aim of:

It is intended for researchers, teachers, postgraduate and undergraduate students.

We publish papers written in Russian or English.

Publication of articles is free of charge for the authors.

The articles are refereed in Zentralblatt MATH (ZBMATH) and SCOPUS.

The journal was included in the list of leading peer-reviewed periodicals of Higher Attestation Commission in 2010. 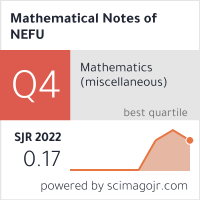